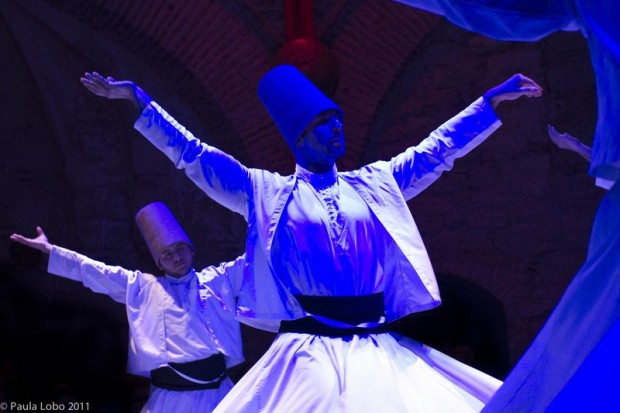 Come, whoever you may be
Even if you may be an infidel, a pagan or a fire-worshipper, come
Ours is not a brotherhood of despair.
Even if you have broken your vows of repentance a hundred times, come
(Mevlana) Yet an authentic performance is harder to find than you might imagine. In touristy Istanbul, several cafes and restaurants have whirling dervish evenings. But while the performances have justifiably become tourist attractions, the dance is a mystical Islamic ritual with deep spiritual significance, performed as a means to reach the divine.

It shouldn’t be followed by women belly dancing. And observers certainly shouldn’t sip on wine as they watch.

But these less-than-authentic performances serve a purpose. On my first day in Turkey – head spinning from Istanbul’s friendly, frenetic intensity – I see a glimpse of spinning robes in the window of an Istanbul restaurant and am gripped by curiosity. How do they spin so fast? Aren’t they overcome by dizziness? Why do they wear white robes and tall felt hats? What does it all mean?

Sufism is the inner dimension of Islam. It focuses on the beliefs at the core of Islam, rather than law and practice. Like Buddhism, it blurs the line between religion and philosophy and, like Buddhist monks, Sufis strive to find enlightenment by shedding their outer selves and finding the divine within.  Sufism is generally progressive and tolerant of other beliefs.

“Do you travel to Konya?” a merchant at Istanbul’s Spice Bazaar asks. “Go to Konya. There you see dervish. It is best.”

Over coffee – served short, strong and muddy – with the call to prayer ululating around us, a Turkish friend tells me the merchant is right. I admit I’ve never heard of the Anatolian city of Konya. “Millions of Turkish people visit there on pilgrimage every year,” she says. Konya is the burial place of Mevlana Celaddin-i Rumi, known affectionately as ‘Rumi’, one of the most important Sufi poets and philosophers and founder of the 700-year-old whirling dervish order.

But first, to Cappadocia, land of the ‘fairy chimneys’. It’s evening when we drive from Kayseri airport across a dark plain towards the township of Göreme. There are no lights anywhere and stars twinkle in the cold, silent night. Suddenly, we see a strange formation protruding up from the plain: a fairy chimney.

The next morning it’s like we’ve been beamed up overnight to the Star Wars planet of Tatooine. When we emerge from our cave accommodation we’re greeted by a lunar-like landscape carved from the lava and mud of ancient volcanoes. As Cappadocia’s unique combination of hard and soft rock eroded, it created mushroom-shaped towers and conical peaks: the fairy chimneys.

Yet they’re not merely strange rock formations. The chimneys conceal homes, hide-aways and churches, which explains the windows peeping from the top. Beneath the ground are 36 underground cities – though with 150 archaeological excavations carried out in Turkey annually, more may yet be found.

The Museum is a condensed pocket of Byzantine-era cave churches with weathered frescoes on the walls; austere and almost primitive. Yet it’s their austerity that makes them so affecting. After the parade of cathedrals throughout Europe, visiting a cave church is like staring faith straight in the eye. There’s no stain glass or mosaics to marvel at; just carved-out spaces where the faithful came to pray. The museum is a wonderful introduction to Cappadocia’s history, which reads like an adventure novel of devotion, persecution and survival.

We wander back to Göreme to smash some kebabs. Literally. A ‘testi kebap’ is casseroled in a terracotta pot all day then smashed open with a hammer at your table. Our waiter appears to enjoy the experience as much as we do and we’re struck, again, by how unjaded the locals are here. While they try to sell us their wares, bargaining in Turkey is a friendly game of wits. It also helps that the country is a shopper’s paradise with Ottoman-style jewelry, spices, perfumes, pashminas, sweets, coffee sets, fezzes, ceramics, leather shoes, hookahs and carpets all on offer.

The subterranean city of Derinkuyu is our next stop. Christian monasticism came early to Cappadocia as ascetics sought refuge in caves from the world’s distractions, devoting their lives to prayer, penance and fasting. When Arabs began raiding central Anatolia in the 7th century, the monastic communities were literally driven underground. Historians think they only stayed underground until the marauders passed overhead but, even so, the claustrophobia, darkness, smell and oppressive boredom must have been gruelling, especially for children.

Over a freshly-squeezed pomegranate juice, our guide Adem tells about Turkey’s unfulfilled quest to enter the European Union. He becomes grave when it’s raised, as do most Turks. “I think we should not waste any more time. We don’t need it. If it were that good then other European countries would not be in such trouble now.”

It seems to be an issue of hurt pride, complicated by the misunderstandings many Westerners have of Turkey. Islam is the primary religion here but when the Ottoman Empire dissolved and World War I hero Atatürk became president in 1923, he launched sweeping reforms to convert the new Republic of Turkey into a secular nation state where the role of religion was restricted. Women were emancipated, centuries-old religious social structures were dissolved and Western legal codes, dress, calendar and alphabet were introduced. The religious education system was replaced by a secular one. Many Turks are surprised to hear religion is taught in Australian public schools.

The balloons wait in a field of red poppies. We climb into the wicker basket, arranging ourselves into our partitions like a human picnic pack. Furious blasts of hot air begin to pull at the basket and it skates sideways, gently skimming the grass. The gas is turned off and total silence descends as we rise up over a flat-topped plateau and drift above fairy chimneys of all shapes and sizes. Occasional blasts of fire redden our cheeks.

“Are you going to the moon Mike?” our pilot says to another pilot on his two-way radio. I turn to see a second balloon so high it’s half obscured by clouds. It looks fanciful and arcane, so lacking in grease, cogs, wheels or steel; the elements we’ve come to see as synonymous with physics-defying feats such as this.

Suddenly, balloons are everywhere, making the utterly bizarre Cappadocia landscape lurch into the utterly surreal. Staring down onto the rock plateau below feels much like a mellow snorkel in clear water. A blue balloon puffs by beneath like a jellyfish and the trees look like bunches of coral. Pockets of wildflowers beckon like tropical fish.

That evening, we go to a bar called Red Red Wine housed in a rustic ex-stable. As we enjoy an apple-flavoured Nargile (Turkish water pipe) the owner points to a portrait of the much-loved Ataturk on the wall.

His hand creeps up to lie flat across his heart. “We need a new Ataturk now.” He recounts what Ataturk said about the ANZAC soldiers who died in Gallipoli. “They’re in our arms now; They are our sons too.”

Disappointment awaits us in Konya. “No dervishes this time of year,” says the concierge. “Only on a Saturday.” Too late, we discover the seven-day Mevlana Festival is in December. Worse, it’s Sunday. Konya is interesting but we can’t stay seven days.

We get lost heading to the Mevlana Museum. There’s one million people living in Konya, yet just one street off the busy thoroughfare and there’s tractors chugging by, people herding chickens and the pleasant grassy small of grazing animals. Thankfully, a man with an impressively brushy moustache directs us to the museum.

We pass under a silver gate with Mevlana’s couplets engraved on it alongside a steady flow of Muslim pilgrims. We feel very foreign in this former lodge of the whirling dervishes but are comforted to learn Rumi is one of the most popular poets published in the West with Madonna, Donna Koran and Oliver Stone just some of the Westerners inspired by his words.

The Museum features several beautifully bound Korans and the most valuable silk carpet in the world. In one room, a particularly reverent crowd of pilgrims gathers around a glass display box. In it, they believe, a small mother-of-pearl box contains a snippet of the Prophet Mohammed’s beard. In an adjoining room are the tombs of Mevlana, his father and his son, covered in velvet shrouds. Pilgrims are quietly praying everywhere I look.

The Museum’s audio-guide teaches us more about Rumi, who was born in 1207 in Balkh in modern-day Afghanistan. Zoroastrian Magi, Hellenistic philosophers, Christian missionaries and Buddhist sages all left their mark in Balkh, which incited a spirit of enquiry in the young scholar. He lived in several cities – including Baghdad, Mecca, Medina and Damascus – before settling in Konya in 1228.

Rumi developed a very close friendship with a Sufi disciple called Shams Tebrizi and they spent weeks alone philosophising and performing whirling rituals. Sadly, Tebrizi disappeared – probably murdered – and stunned by the loss, Rumi withdrew from the world to meditate and write his greatest poetic work, the 25,000-verse Mesnevi. The night Rumi died is still known as ‘The Wedding Night’ when he was re-united with Allah.

After Rumi died, his son Sultan Veled formed the Mevelvi whirling dervish order, founded on love and tolerance, with dance (called ‘Sema’) as one of its foremost ceremonies. Ataturk made the dervish order illegal in 1925 but in 1957 it was revived as a cultural association.

We return to Istanbul well educated on sufism but unfulfilled in our quest to see a whirling dervish performance. But we are in luck. At a favourite Istanbul sweets shop, we discover that members of the Sufi Cultural Society are performing that evening at the HodjaPasha Cultural Centre.

The setting is perfect: an old domed bathhouse bathed in deep blue and red light. A quartet called a Mutrip enters featuring a tambur and a kanun (both stringed instruments), a ney (recorder) and a kudum (drum). I have never heard music like it. The harmonies are gentle yet filled with pace and adventure.

They stand, quite still, arms crossed over their chest and hands draped gracefully over their shoulders. They walk towards one dervish and line up behind him. Then each dervish peels off and – as the choir sings – they start spinning one at a time.

As they spin, the circle of dervishes also slowly rotates. The dance represents a journey of spiritual ascent, whirling towards unity with god and perfection.

With their heads cocked sharply to one side, their arms come free and almost imperceptibly blossom upwards to take an outstretched pose; one hand facing down to humankind, the other facing upwards to Allah (“From God we receive, to man we give, we keep nothing for ourselves”).

They spin so fast they blur, like they may transcend before our eyes. I am holding my breath, captivated. It is somber, heartfelt, spiritual and perfectly dramatic. Their skirts billow out forming yet another perfect circle.

They stop, bow and form a semi-circle again, displaying no signs of dizziness or haste. They are the incarnation of poise and dignity; of supplication and surrender. They pick up the cloaks and kiss the hem, don them, bow again, then they’re gone.