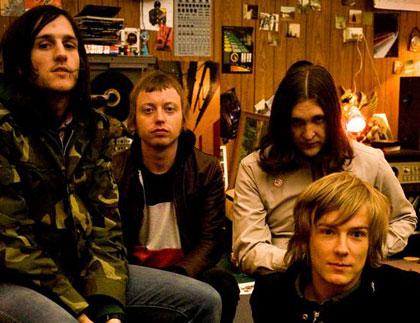 Sometimes, nothing can sum it up better than commentary from the random pissed guy, lurching through the crowd with his schooner.

Wolf & Cub are playing their hearts out to a capacity Sydney crowd who all appear to be aged between 18 and 18-and-a-quarter. A casual poll in my immediate vicinity reveals many are primarily here to see tour support act The Scare.

From opener ‘The Loosest Gooses’, the cubs work it hard. Not long after, singer and guitarist Joel Byrne is felled by an early fit of rock’n’roll animalism, gripping and shaking the guitar lead in his teeth and following up with a quick ground-writhe. Whoa.

The mood is party. The sound, however, is shit.

Fortunately it’s Friday, the beer’s flowing and it takes a little while for these two aspects to unhappily collide. Byrne’s guitar is the most noticeably absent. It’s over processed and utterly lost in the mix, which could also be the reason why his rock posturing is a bit off-putting. If the crowd’s not lost in the guitar, he has no right to be. We shouldn’t have to resurrect our collective knowledge of the guitar bits on the album just so we can nod along.

Wolf & Cub’s drumming duo are – as always – novel to watch. Although I kind of miss the Aryan-hued backdrop of their previous line-up when blondie Adam Edwards beat the skins alongside blondie Joel Carey. But hey, new drummer Marvin Hammond can play the sax, so who’s complaining?

My squishiest soft spot, in any case, is reserved for bass player, Thomas Mayhew, who looks like he should be slugging the post-gig rider with Sabbath in ’72.

It’s not his clothes, specifically, or his middle hair part, the scowl, his beard, or his slouch, although it’s definitely a combination of these things. The guy just looks so metal. No chance we’ll catch him in stovepipe jeans and pointy shoes with tiny little laces at any gig soon.

It’s at about the time they play ‘Seven Sevens’ when our drunken friend saunters over. “So whaddaya reckon, handlebar? You a fan, or is this shit’ouse?”

He’s waiting for a reply from my partner (who, yes, has a handlebar mustache) but we avoid further interrogation as Wolf and Cub launch into crowd-pleaser ‘This Mess’ and he meanders away. But he’s summed up the growing sense of ambivalence.

The disappointing sound and Wolf & Cub’s inability to cut through and transport people has begun to deflate the crowd. Thought not through a lack of effort on their behalf. Byrne tours the crowd with a cowbell. Hammond lets loose with the sax on ‘One to the Other’, more than adequately.

The mix did improve somewhat after a few songs but even when we shimmied in closer, Byrne’s stage amp was tilted upwards, evading guitar-hungry ears. At previous Wolf & Cub gigs, they’ve had the ability, in true psychedelic band tradition, to take you on a journey. It didn’t happen at this show.

Was this because most of the songs came from their new record, Science and Sorcery? Possibly. It regrettably replaces the psychedelic guitar noodlings and forceful riffs of debut album Vessels with squelchy, over-obvious effects. Vessels’ density is mostly abandoned for a sense of space on Science that isn’t crafted carefully enough and, while the tribal drum re-enactments are interesting, they’re hardly dripping soul. They pulled a swifty with the new album, down to the deception of its stoner-rock mystic name.

On a re-listen to Vessels, my instinct is to say that unflattering comparisons between the two records are hardly their fault. Vessels was, after all, a ridiculously likeable record, all 10 tracks of it. But I still reckon the new tracks had the potential to translate well live. And maybe, on another night, in another venue, they would.

The gig did manage to nudge the outer realms of transcendence with the final song, ‘Vessels’, although how could it not? When that tempo change drops, around minute five, who’s got a chance?