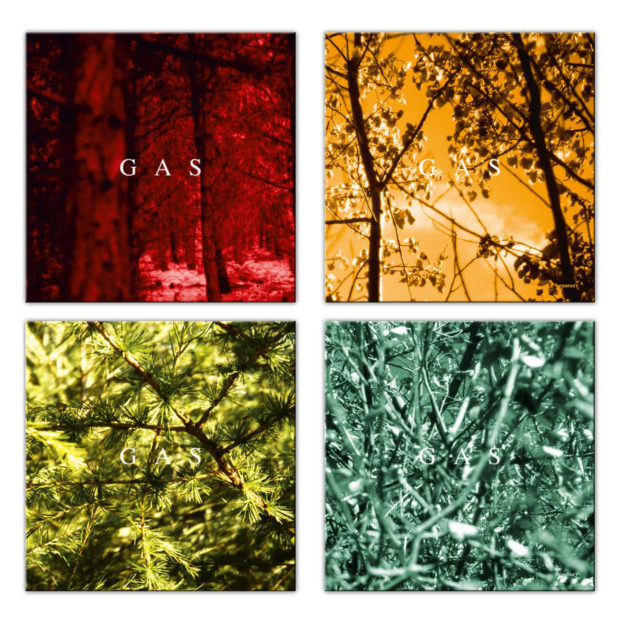 First published in The Wire, October 2016

By gestational week 24, a foetus can turn its head in response to sound outside the womb. Filtered through skin, fat and fluid, if its mother were listening to loud minimal techno the baby might hear something like Wolfgang Voigt’s Gas. Amid the amniotic whoosh and murmur, the music’s thuds would imposter as the thumps of her heart; verifiable, because Gas’s beats can pass for what an adult human hears, ear pressed to lover’s chest. It’s been 20 years since Voigt’s first ambient techno release as Gas. This four-hour anthology proves the decades have eroded none of its power to pull you under with a promise of neverendingness you actually want to ride out.

Kompakt’s first Gas retrospective, 2008’s Nah Und Fern, is long out of print. This mighty ten-LP box set omits Gas’s first record and skips to Zauberberg (1997), Königsforst (1999) and Pop (2000). These albums were originally pressed as two LPs each. For this re-issue Voigt dug up longer unreleased edits with “superior sound quality”, extending them to three LPs each. The tenth record is the Oktember EP, an addition that leavens Gas’s default-mode oppressiveness, with the trebly metallic shimmer of “Tal 90” bringing to mind “Wind On Water” from Robert Fripp and Brian Eno’s 1975 record Evening Star.

The vinyl pressing is high-quality and these albums deserve every extra crumb of clarity analogue can muster. Sure, Voigt may prime his canvasses alike – elongated strings and horns; marrow-deep beats pounding from the depths – but each track is shaded with new instrumental nuance: foghorn tuba, rumbling bass piano, or violin that loops into a bracing cacophony.

Vinyl is a less phony home, too, for the crackles and pops on Zauberberg caused by Voigt sampling old classical records. Appreciating analogue flaws via digital means always felt a little silly. The crackles are the only touch that has dated poorly because producers such as Burial have since plunged the effect to such emotional depths. But who could begrudge Voigt the rare moments in his back-catalogue where he’s been lapped by a protégée? It’s touching to hear him reduced, momentarily, to a rookie and certainly confirms the osmosis of his influence is complete.

Still, ten LPs is a lot of flipping. How is a preparatory track like “Pop 6” supposed to ease you under the eiderdown of “Pop 7” – a masterpiece of relentlessly hushed industrial techno – if you must keep getting up from the couch/bed/floor? The answer is in the four CDs that also come in the set. Clear the shelves.