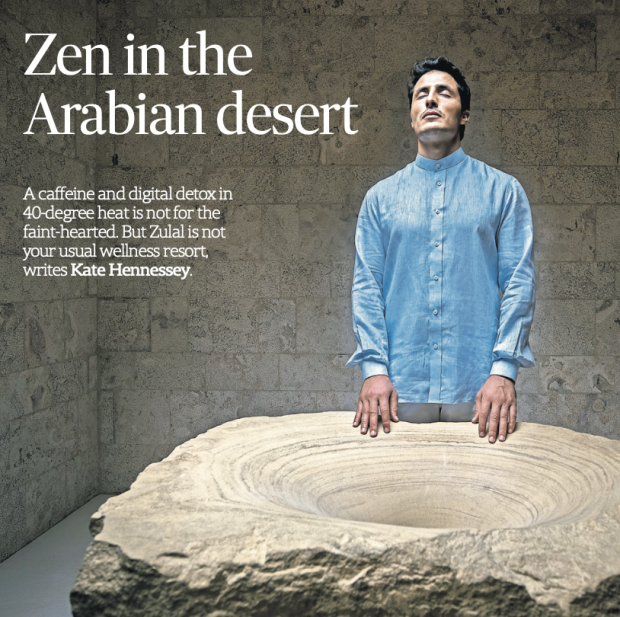 Zen in the Arabian desert

My hand goes for my phone – and stops. ‘‘We promote the digital detox here,’’ I’d been fairly firmly told on entering the foyer of Zulal Wellness Resort – though it’s less foyer and more ‘Bond villain with excellent taste in minimalist art’ bunker in the desert. How will James get out of this one? 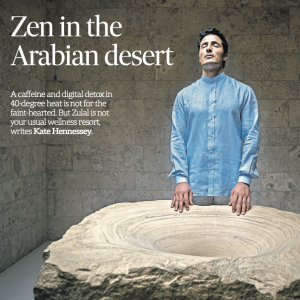 I’ve been left to enjoy my lemongrass tea in Zulal’s House of Wisdom: an elegant mash-up of tearoom, library, apothecary and art gallery. The urge to photograph the jug of creamy white honey from Kyrgyzstan fades as fast as it has flared. I’m glad for the rules. Had I bottled the moment, I’d have lost it too; stashed away as a two- dimensional glow. I may not be ready for a past-life regression session but logging out of the matrix for a few days? Yes please!

Ninety minutes into the drive north from Doha to the Arabian Gulf, there’s a sign to Zulal in the stony ground. Even so, when the terracotta-coloured resort materialised on this 40-degree day it felt like a mirage made real. Creatures out here have evolved for millions of years to survive a day like this, yet here I am accepting a cool scented towel and a branded kombucha called Qamboucha. In a primitive way I can’t quite switch off, let alone embrace the luxury of the place. The desert scorch makes life itself feel precarious.

Inside the resort’s outer walls, a turquoise lagoon laps the edge of the buildings. Zulal means ‘purified water’, a nod to the Bedouin days when the camel trains passed through. In the House of Wisdom, every wall, painting, surface and soft furnishing occupies just a couple of clicks on the colour wheel between off-white and beige, with some opalescent shell tones thrown in for a bit of bling.

Shades of sand in a nation full of it. Qatar’s surface is made of limestone, gypsum, pebbles, salt flats, dunes and dust, yet beneath are vast reserves of oil that have made the small Gulf country one of the wealthiest in the world. Presiding over that wealth is the Qatari royal family, to whom the health of their people is a stated priority. The Al Thani family dynasty owns Msheireb Properties, which owns Zulal, which was enough to lure renowned wellness brand Chiva-Som from Thailand’s tropics to the Middle East.

Zulal is just the second Chiva-Som resort to open after its Hua Hin flagship in 1995. ‘‘We have a relationship with the Qataris and we watched the development of the country,’’ says Chiva-Som chairman and chief executive Krip Rojanastien. ‘‘There’s a significant focus on education, medical development, wellness and sports. We like these areas.’’

In place of Thai treatments is ‘traditional Arabic and Islamic medicine’, or TAIM. ‘‘We have no problems combining these wellness modalities,’’ says Rojanastien. He explains that Chiva-Som’s signature Chi Nei Tsang(an abdominal massage apparently favoured by Serena Williams and Madonna) is known at Zulal as ‘Massage al Batin’.

‘‘Maybe they’re called Arabic names, but Islamic medicine is basically a combination of the wellness wisdoms from various parts of the world, particularly from the east,’’ he says. ‘‘Wellness crosses cultural and racial boundaries and in the coming decades, as people understand more about it, wellness could become the unifying force. Everyone wants it. Some people are a bit self-destructive but deep down, everyone wants to be well.’’

If wellness is going to inherit the earth, you should probably get familiar with TAIM. ‘‘Everybody knows about Ayurveda, they know about traditional Chinese medicine, but traditional Arabic medicine is nowhere to be found,’’ says Zulal’s general manager, Daniele Vastolo. ‘‘The idea is to bring it back and to give visibility to TAIM.’’

That’s the least of Zulal’s ambitions. ‘‘Zulal is the first real wellness resort in the Middle East,’’ says Vastolo. ‘‘A few are coming up in Saudi Arabia and the United Arab Emirates but none come close to what we do. The idea is in 18 months, next door, to have an elective medical centre for futuristic medicine where they do your DNA sampling to predict illnesses.’’

The other new aspect is family wellness; a big reason for Zulal’s royal support. Whole families (sullen teens included) are invited for psychological assessments, treatments, activities, digital detoxes and healthy food. ‘‘The Gulf countries have a young generation suffering with obesity and addiction to digital so we need to do something – and prevention costs less,’’ says Vastolo.

It’s not about slopping around in your sarong from cabana to cocktail here. Exercise is part of the program that you literally sign with your health and wellness co-ordinator as witness. At lunch on day one at Al Sidra restaurant, a guest from Germany suddenly scrapes back his chair. ‘‘I’m due at table tennis!’’ he exclaims.

Zulal’s art and artefacts, meanwhile, are equally objects of meditation. An Anish Kapoor sculpture is kept within its own cube-like room – a hip-high block of rock with a cavity in its centre, orbited by swirls of stone. Elsewhere is a smooth black whetstone from the early neolithic period. The adjoining library has floor-to-ceiling books, modelled after the Grand Library of Baghdad, lost to war and antiquity. Its 3000 books cover history, architecture, geopolitics, literature and poetry, with a few holiday reads charitably thrown in. The height of the bookshelves is ‘‘at once welcoming and imposing, a tower of learning’’, a sign reads.

Much like Zulal. Being here won’t work unless you give all of its wellness pillars a red-hot go. There are six – and none are taken with a morning coffee. Screen time joins the contraband of caffeine, alcohol, non-organic ingredients, sugar, gluten, bad oils, and food both deep and shallow fried. ‘‘We prefer our guests to drink tea,’’ says my butler, Oliver, when I ask: ‘‘Is a morning coffee so bad?’’

I feel a tad ambushed on the coffee front. Qatar operates under Sharia law and is largely alcohol free, so I’m prepared for that. But coffee, no. I blame my lack of balance at the 7am tai chi class on my lack of caffeine. Oliver understands. He sources a Nespresso machine for my room and apologetic piles of pods appear at both my morning and turn-down services. Inscrutable murmurs from Zulal employees greet me when I explain the coffee thing. I dig deep and surmount my defensiveness. Maybe they’re right. Maybe I should cut back.

The coffee comes with cashew, almond or oat milk. The only exception to the non- dairy regime is for yoghurt as well as butter in the breakfast croissant. That croissant, however, is a third the size of a regular one and sooty-black. It’s charcoal-infused. Zulal’s bonsai-like dishes are a highlight bordering on a bona fide miracle, carried by silent staff into silent restaurants from silent kitchens. (You get used to it.) You don’t dunk your spirulina bread into your cold melon soup; you feel titillated by taste but never overfed.

‘‘We don’t use the term ‘portion control’,’’ says executive chef Indrajit Saha. ‘‘We devised a way that people should eat correctly.’’ Hospitality portion weights were an ‘‘invented’’ thing, he explains. ‘‘The goal is to make sure that when guests finish a meal, they should not say, ‘Oh, I’m feeling heavy.’ Being uncomfortable is not the idea.’’

Indrajit is from Calcutta. My aqua aerobics instructor, Susannah, is from Lebanon. I wade out at low tide to some protected nearby mangroves with Alicia from Sri Lanka. The practitioner who levers my limbs this way and that in a super stretch session is from Belarus, while Marouane the tea master is from Casablanca, Geoffrey (the second tea master) is from the Philippines and Oliver is from Zimbabwe. I meet employees from South Africa, Kyrgyzstan, Sweden, Italy, Kenya and Goa. People from a staggering 39 nationalities are employed here.

It takes until the end of my three-day stay to relax into the ceaselessness of their hospitality. Leaving one’s villa prompts wall-to-wall ‘‘marhaba’’ greetings (offered in Qatar with a hand on the heart). The demeanour of calm is omnipresent, but just as it starts to topple into oppressive, I start feeling it too. And when Oliver does his closing address, hoping my ‘‘journey’’ has been transformational, the authenticity of his tone is more touching than what he says.

Royal-backed wellness ambitions aside, this is Zulal’s most marvellous point of difference. And while each employee mentions struggling with the intense summer heat, a waiter from South Africa says their desert accommodation is ‘‘top notch’’.

Having been in the business for more than 25 years, Rojanastien understands Chiva-Som relies on people power. ‘‘Seeing the staff over there was a very warming experience,’’ he says. ‘‘Seeing the people you have trained and put a lot of trust into and their commitment to the wellness lifestyle delivery.’